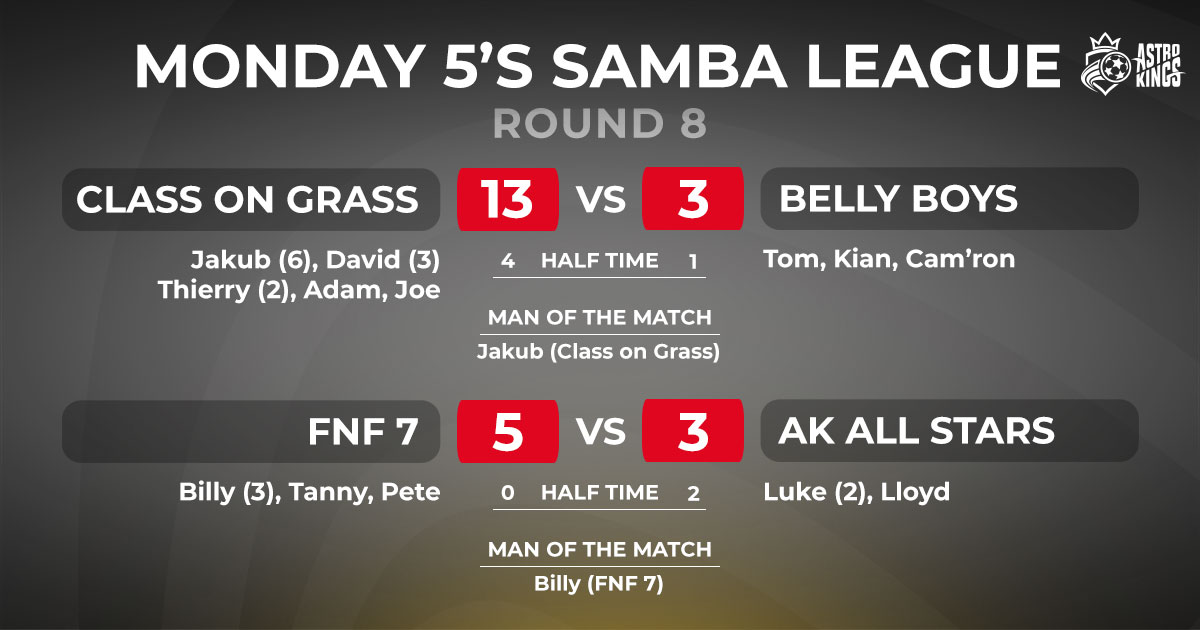 The youngest squads in the league played out an important fixture as Class on Grass were hoping to break into the top-three.

Belly Boys opened the night’s scoring before Class on Grass clicked into gear scoring four without reply to lead four-one at half time.

Class on Grass extended their goal cushion by two, before the Belly Boys managed to find the back of the net again. Wanting to add to their goal difference; Class on Grass piled on the pressure as Belly Boys formation and tactics let them down as David picked up his hat-trick, and their team’s top-scorer Jakub scoring six on the night.

Sitting at the top of the league; AK All Stars knew that a win tonight would be crucial for their campaign to create a gap between themselves, Betel Nottingham and tonight’s opponents FNF7 once games in hand were taken into account.

The game started perfectly for the All Stars as they worked a two-nil lead in a competitive game before All Star’s Lee Bush saw red for dissent. With just three outfield players and 30 minutes left in the game, it quickly became a game of defence v attack. Somehow the score remained two-nil until half time.

FNF7 pressed incessantly but it was genuine luck which saw the first goal go in. Billy dragging a weak shot through James’s legs and with the keeper expecting a shot into the opposite corner; the ball bobbled inside the near post. And then the cracks widened; FNF7 taking full advantage as in scoring five goals despite Luke grabbing a second to briefly raise the chances of a miracle result.

All Stars were left to reflect on what could have been, but the referee has to be respected at all times and was well within his rights to show red; a lengthy ban awaits.

Only two things need to be said about this friendly – Craig scored and David got Man of the Match – It means a lot to both.