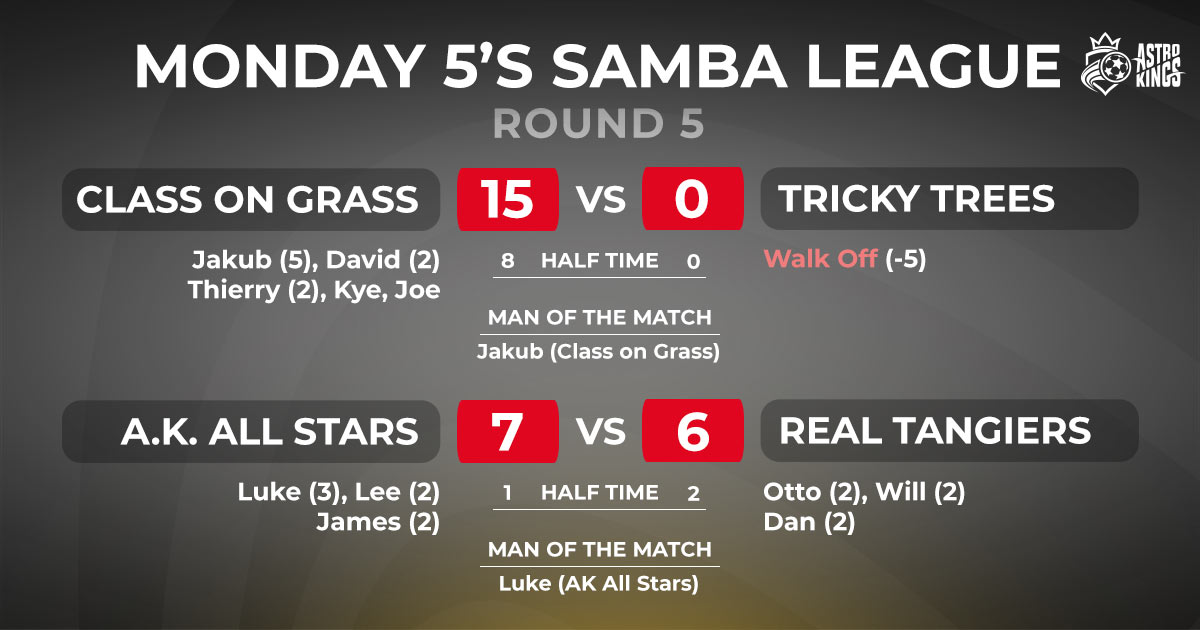 This week we had Class on Grass facing the experienced Tricky Trees. The hosts showed they also have class on 4G; as they scored 8 goals without reply, playing high-tempo football and stretching Tricky Trees across the pitch. The Trees struggled to contain the youngsters’ pace, and failed to hit the back of the net themselves in what was a disappointing half of football for them, and a strong twenty minutes for Class on Grass.

The second half kicked-off and Class on Grass showed they had no intention of stepping off the gas, they were still hungry for goals to improve their goal difference in the league. The in-form Jakub took his night’s goal haul to four and the Trees still could not penetrate Class on Grass’ defence who’s pacey brand of football left the Trees in all sorts of trouble.

With several minutes still left on the clock Tricky Trees made the decision to call it a night; the energy and tenacity of the young team proving too much for their experienced yet exhausted team. Class on Grass were awarded five more goals because of this, which vastly improves their goal difference entering next week’s fixtures.

The last time the AK All Stars faced Real Tangiers, the Stars ran out comfortable 12-3 winners and heading into this evening’s fixture; they knew a winning margin of 7 or more would put them top of the league on goal difference over Betel Nottingham. Confidence was obviously high as the match kicked-off and it was a definite shock to the Stars when Real sprinted into a two goal lead.
Despite pulling a goal back late in the half, Stars were clearly second best and needed a proper team talk at half time. Now, either the team talk or the decision to put join top scorer James Rose in goal was awful as Tangiers first smashed two past James, then two past the usually excellent Tom Viles, as captain Luke Wheeler took his turn as sub – the wheels were off.
Real lead 6-1 with new boys Will and Will playing excellently and Danny picking up more goals in his quest for the golden boot, a real hammering was a formality. However, as Luke came back onto the pitch, the All Stars began arguably the greatest comeback of all time as the pendulum swung.
Finally Stars began to play some bright, incisive football and pressed Real back. Goals from Luke, James and Lee Bushell drew the game level at six goals a piece with some remarkable football. Moving into the last five minutes, it was anybody’s game as both teams pressed forward. Ultimately Stars struck with Luke securing his hat-trick making it 7-6 to AK who held on with desperate defending, as Real pressed for an equalizer that wasn’t forthcoming.
An incredible game which sees Stars draw level with Betel at the top of the league, while Real will have to make do with a good performance, albeit not quite enough this time round.