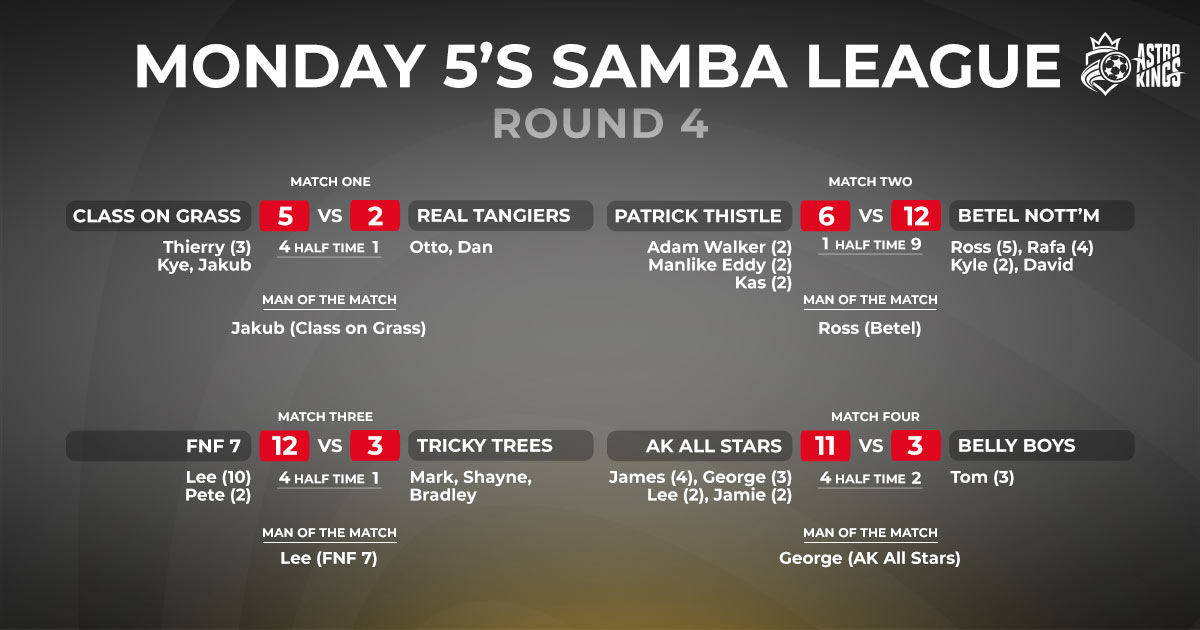 Kicking-off the first of the four Bank Holiday Monday fixtures was Class on Grass versus Real Tangiers. These two teams have already met before in the league tieing their first meeting with seven goals a piece. It was a different story in this fixture though as Class on Grass scored 4 early goals without reply. Tangiers managed to score one before the break but were struggling to find the net without the injured Ali. The second half was a tight affair with just one goal a piece. Class on Grass will be happy with their first win of the season.

In game two of the evening Patrick Thistle faced Betel Nottingham, two strong sides that aren’t short of goals. It was Betel who had the strongest start with their goal-scoring talisman and league top-scorer Ross McMenemy on fine form, but Thistle were missing some key players due to the bank holiday and the team didn’t look their usually dangerous self. The first half finished 9-1 to Betel. The new additions to Patrick Thistle started to gel in the second half and the team upped their game, scoring 5 to Betel’s 1. The unity and experience of playing together was the deciding factor for Betel who protected their lead effectively. Thistle will be hoping to get their strongest team back together for their next fixture against the unbeaten AK All Stars.

Game three of the night saw FNF 7 pitched against Tricky Trees. FNF 7 were hit with squad problems but utilised the Astro Kings Subs Bench and drafted in two players Lee & James just in time for kick off. The temporary signings proved efficient as it gave FNF 7 a 4-1 lead going into the break. Although starting the game well; Tricky Trees struggled to contain FNF 7’s attacking threats in the second half, which saw Lee score his tenth goal of the evening, becoming the first player to reach double figures in a single game this season. Using the subs bench proved to be a shrewd and wise move by FNF 7 who took their goal tally to 12 in the second half, finishing the game 12-3.

In the final game of the evening we were treated to the match-up of undefeated AK All Stars and newcomers Belly Boys. It was a strong start for Belly Boys who went 2-0 up early and grabbed the attention of the whole league. However the All Stars decided they’d been far too welcoming to the newcomers and managed to score 4 goals before the break. It was the second half where Belly Boys’ lack of squad depth started to show, only scoring one and conceding seven. Having only the minimum 5 players proved costly for Belly Boys, who would gave the All Stars a run for the money had they had a strong subs line-up.