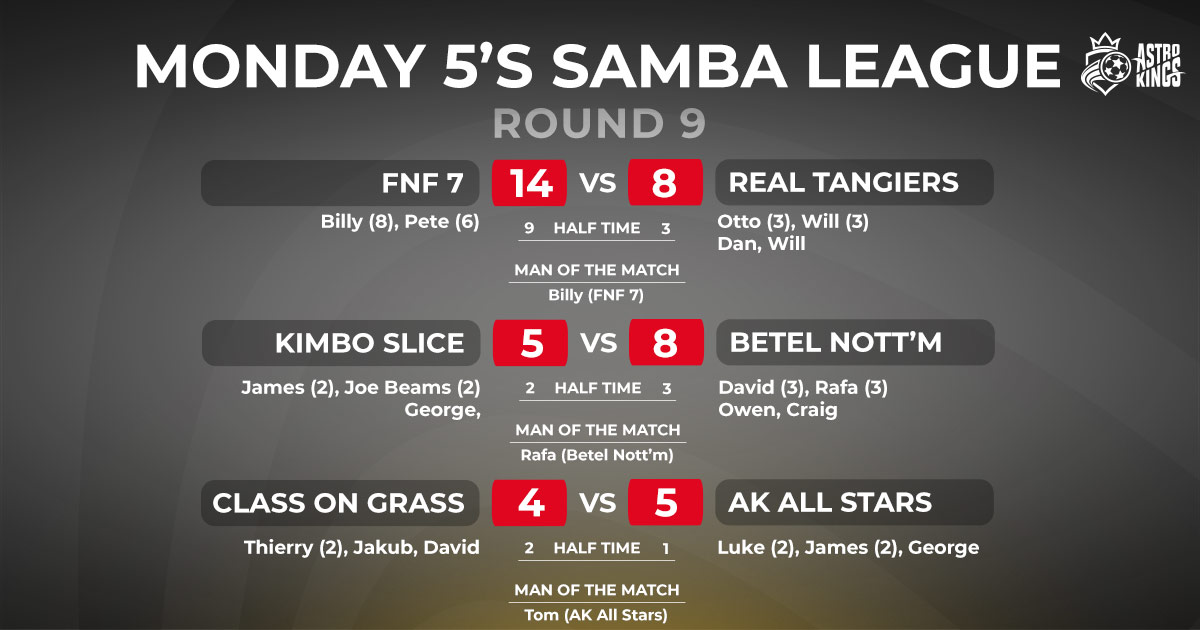 On a three-game winning streak FNF 7 were looking to continue their excellent form when faced with mid-table Real Tangiers this week. Their intentions were clear very early on, as the FNF strike-force of Pete and Billy both scored a first half hat-trick, before Real managed to bag their first goal. Pete’s first was something special too as he beat the last man with a roulette before slotting the ball home. And the goal-hungry duo were not finished. In one of the highest scoring first halves we’ve seen this season; Real scored another two and FNF extended their lead by another three, leaving the pitch at half time with a nine-three lead.

The second half was equally as entertaining for the neutral fan. Both teams enjoyed more goals as Real were in no mood to give up, despite the deficit. Scoring five goals each in the second half – both teams shown great attacking threat. Real’s Otto and Will enjoying hat-tricks, and FNF’s Pete and Billy scoring six and eight respectively. A gallant second half effort from Real but not enough to take points from FNF this week.

New additions to the league Kimbo Slice were shown no gentle introduction this week, as they faced league top-scorers Betel Nottingham. The title-chasers showed the newcomers the finishing we’ve been accustomed to this season as Rafa Lewandowski and David Zakulec opened a three goal lead. Most teams would have folded at this point, but Kimbo Slice showed the league that they’re not a team to tap-out early, and scored two before the break, ending the first half three-two down.

Both teams were hungry for more goals in the second half, but it was Betel that hit the target first; extending their lead with another three goals. Kimbo then scored three on the bounce, and sliced Betel’s lead down to one goal. Unfortunately – they couldn’t keep up that momentum, and Betel scored another two and secured the three points.

A good game for Kimbo Slice considering it’s their league debut, and against title contenders. Will definitely be one to look out for in the upcoming fixtures.

Coming off the back of defeat to FNF 7 and without top-scorer Lee Bush – missing through disciplinary reasons – AK All Stars were desperate for all three points to keep their title dreams alive. Hoping to scupper these plans were Class on Grass.

Class drew first blood, scoring two goals in quick succession as the game remained tight. All Stars pulled one back before half-time, but Class must have thought they were going to deliver on the promise they show every week, as they held a narrow lead at the break and their first win in three games looked on the cards.

The All Stars came into the second half a different team, scoring three without reply. Class pulled one back and looked to draw level with Jakub pulling the strings at the back, looking to play Thierry in at every opportunity, but heroics in goal from the Stars’ Tom, denied Class on Glass chance after chance. A second goal came from James, curled round Jakub giving the Stars a five-three lead, and the match looked done. But straight from kick off David scored a fourth and despite huge pressure in the final minutes; AK All Stars held on to walk away with all three points on the night.