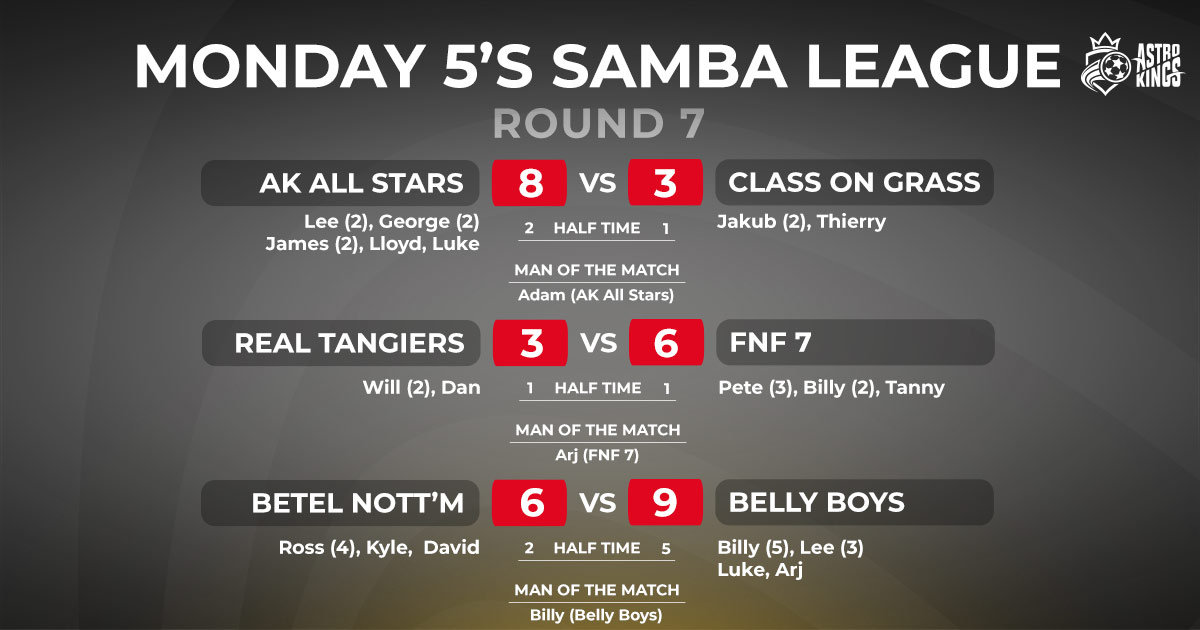 Week Seven will go down as the week the league was blown wide open, thanks to some extraordinary results which leaves Betel leading the league on goal difference, with AK All Stars and FNF7 just three points behind with a game in hand. The latter two teams meeting next week in what could be a deciding factor in who will go on to challenge Betel for the title.

After suffering their first defeat of the season against league leaders Betel last week; AK All Stars knew they had to beat Class on Grass to keep up their title chase. However it was Class on Grass who struck first with a deflected shot which clipped James’s boot giving George no chance in goal.

Debutante Adam took over in goal at the first switch and it was probably that switch which made all the difference as the All Stars struck twice to lead at the break.

As the second half progressed the All Stars, extended their lead to five-one, before taking their foot off the gas and conceding a couple of good, but potentially preventable goals, as Class on Grass threatened a comeback at five-three. With help from Adam pulling out a string of saves and denying a hat-trick for Jakub, the All Stars re-focused and finished the game strongly with all out-field players finding the back of the net.

Real Tangiers came into this fixture against FNF 7 on the back of their first win of the season, and they looked to keep up the momentum when they went one-nil up straight from kick off. FNF 7 – who themselves are on a two-game winning streak – fought back well and managed to equalise before the break.

The defensive first half made way to a more open second half. FNF 7 storming into a four-one lead, with FNF’s strikeforce of Billy and Pete giving Real all sorts of trouble. Real conceded one more then managed to find the back of the net twice, as FNF briefly let them back in the game.

Not happy with their two-goal cushion; FNF piled on the pressure and secured the three points with a six-three victory thanks to a hat-trick from Pete and Arj taking the Man of the Match for his performance in goal.

With Belly Boys unable to fulfill the fixture, a team comprising mainly of AK All Stars and FNF7 took to the field in their place. Betel were not concerned having beaten both teams on the pitch and swaggered into this game as only a team who had taken maximum points could, especially after beating closest rivals AK All Stars last time out.

If anything, the game started in typical fashion – tight and tense with Betel exhibiting the form which lead them to the top of the league. Unphased by going behind, Betel equalised, but a brilliant shot by Billy direct from the kick off was possibly the shock-wave which rocked the Betel boat, as they shipped four more goals without reply.

The second half was entertaining for the neutral. Betel looked for inspiration from golden boot-leader Ross McMenemy who racked up another four goals as their opposition resorted to hoofing the ball to the far end of the pitch for respite. It seemed like Betel would once again prevail as tiredness began to show throughout their opponents and perhaps were it not for some excellent keeping from Adam and some dubious (albeit not malicious) challenges from Luke, they may well have done. However, Billy was in excellent form and eased the pressure with a couple of clinical strikes.