Making our Division 1 team of the season is Adam (Pinters), Tyrone (Bookey), Danny (Pinters), Jordan (Pinters) and Chris (Heart of Blokes). Adam was a brick wall in goal, ensuring that the league champions had the best defensive record in their league. Despite Tyrone’s FC Bookey finishing third, he had the season of a champion. Not only scoring 13 goals over the season, but proving a pivotal piece in the team’s build up play. Yet another showing from our champions, Danny scored 26 goals, provided assist after assist and consistently broke up opponents attacks. With absolutely no surprises, Jordan find himself in our Team of the Season. After scoring 61 goals over the season, Jordan had himself a 2008-2009 Ronaldo season, simply unstoppable. Our final spot in the Team of the Season goes to Chris from Heart of Blokes. With 28 goals, Chris was able to ensure Heart of Bloke’s second place finish. 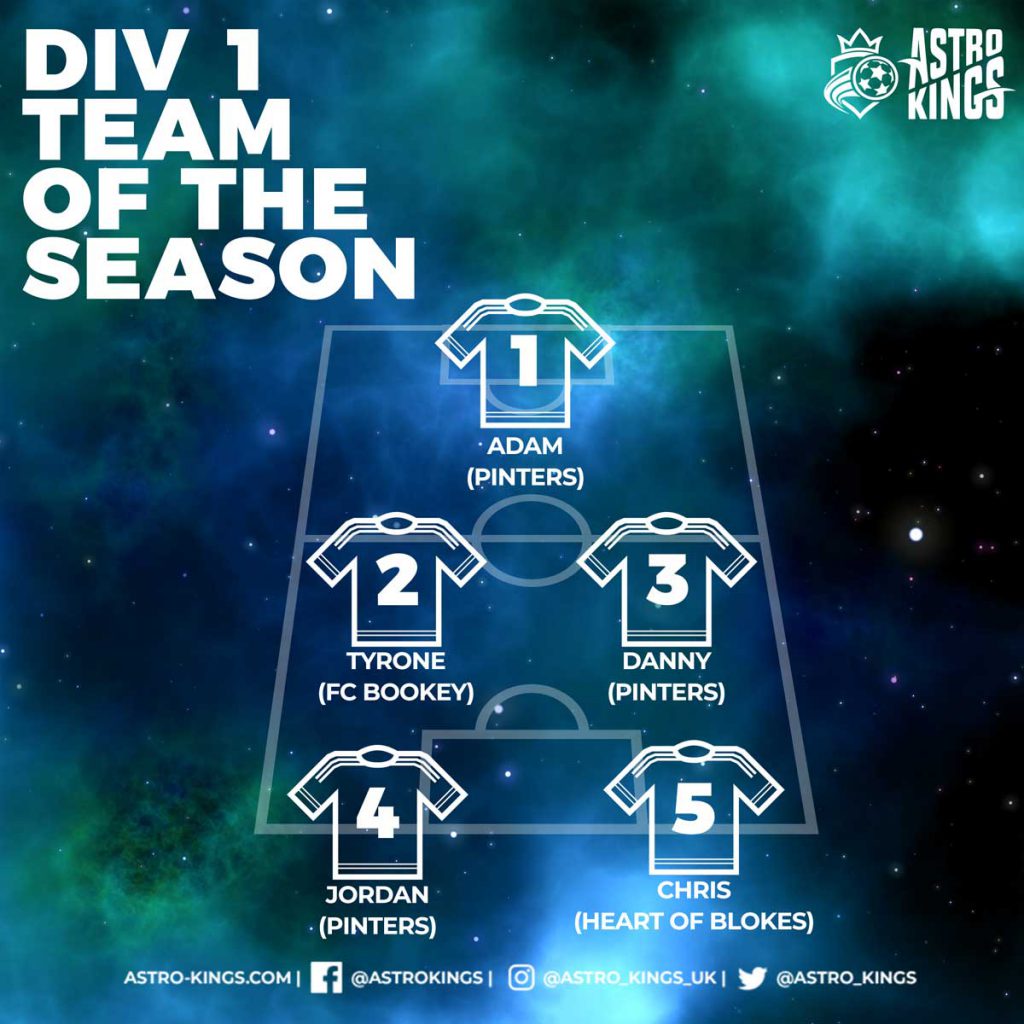 Congratulations to everyone that made our Division 2 Team of the Season. Sam from Net 6 & Chill was able to ball out game after game. Despite conceding 39 goals Sam was undoubtedly the best keeper of the division this season. Our first Team of the Season entry from our champions (Dids) is Jack. Contributing 17 goals whilst preventing attack after attack, Jack proved pivotal at both ends of the pitch. Our second entry from Net 6 & Chill is Evan. The second highest scorer in the league with 18 goals, all while splitting defences apart with his passing. Our least surprising entry in our Team of the Season is Danny from Dids. Scoring 30 goals in 10 games, Danny was a dead cert for this team. Our fifth and final spot of our Team of the Season is Tom from Dids. Although Danny was the main striker for the champions, Tom proved an essential supporting piece with his 14 goals. 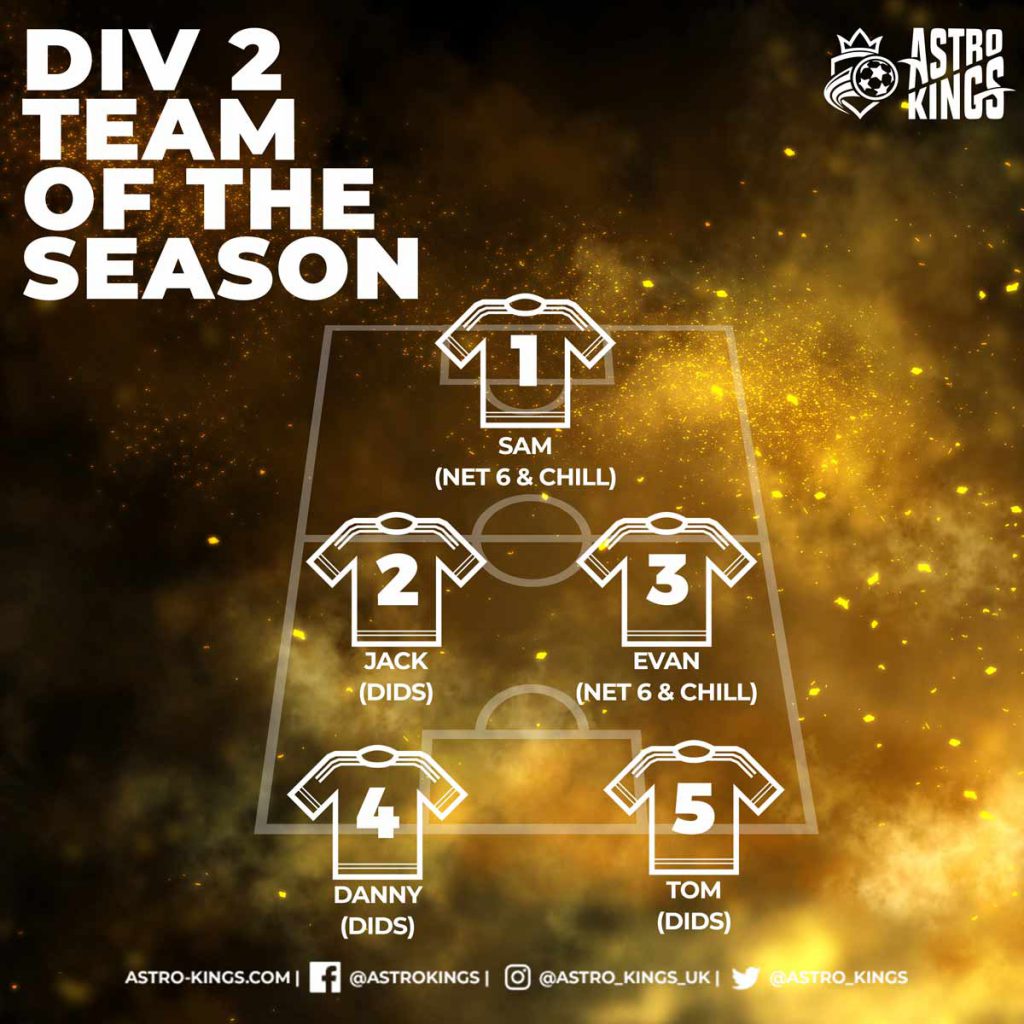 Now it’s time to show off our Division 3 Team of the Season. Adam from Notts so Locks is our goalkeeper for this team. Adam channelled his inner De Gea to keep Notts so Locks in the title race right up until the last game of the season. Jake from Murder on Zidane’s Floor ensured his place in the team with his 22 goals on the season, making him the division winning side’s top scorer. Sherjeel from Khazra was able to earn himself a spot in the top 5 scorers despite Khazra finishing second bottom. There is a high chance that without Sherjeel’s goals Khazra may have finished bottom. Our second entry from Notts So Locks is Tom from Notts so Locks, after a fantastic goal scoring season, earning himself the golden boot with 31 goals. Our fifth and final spot in our Team of the Season belongs to Nathan from TBC. Finishing the season with 23 goals, he kept neck and neck with Tom in then race for the Golden Boot. 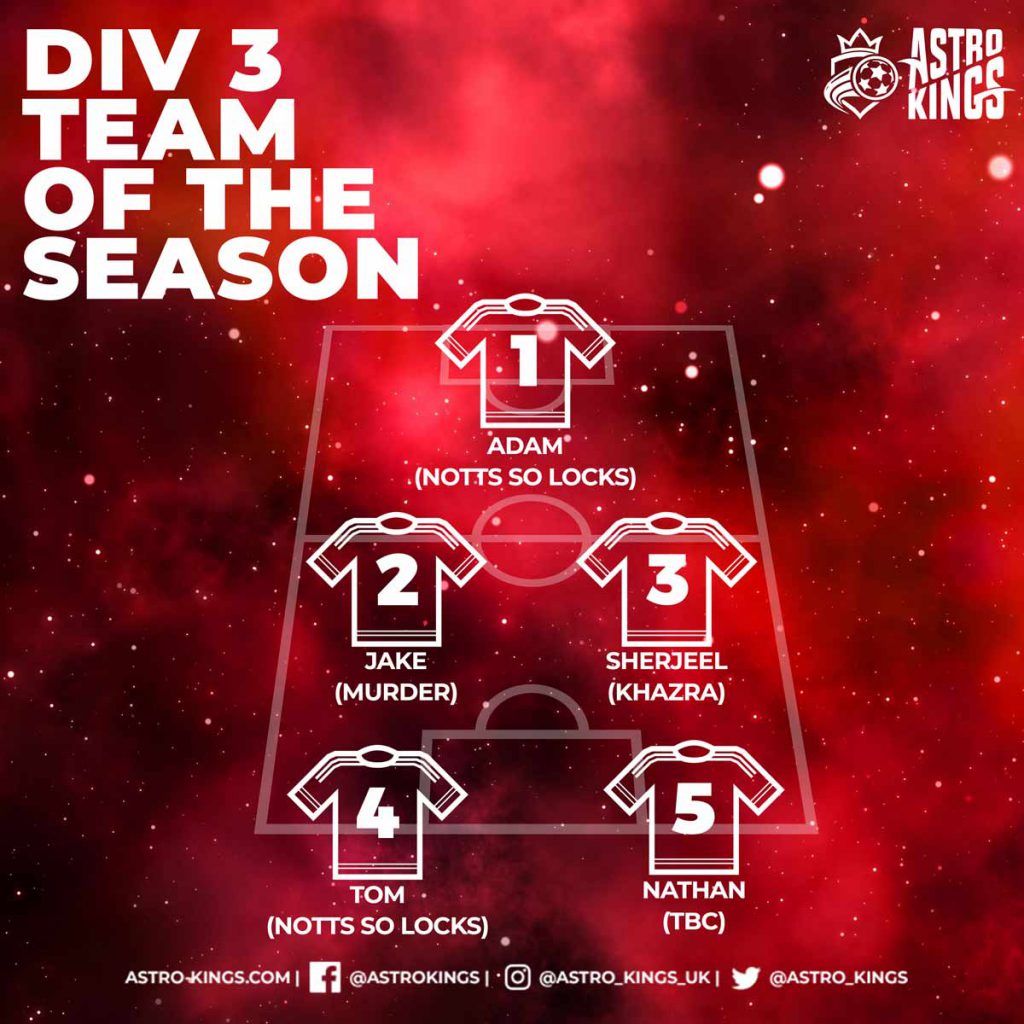