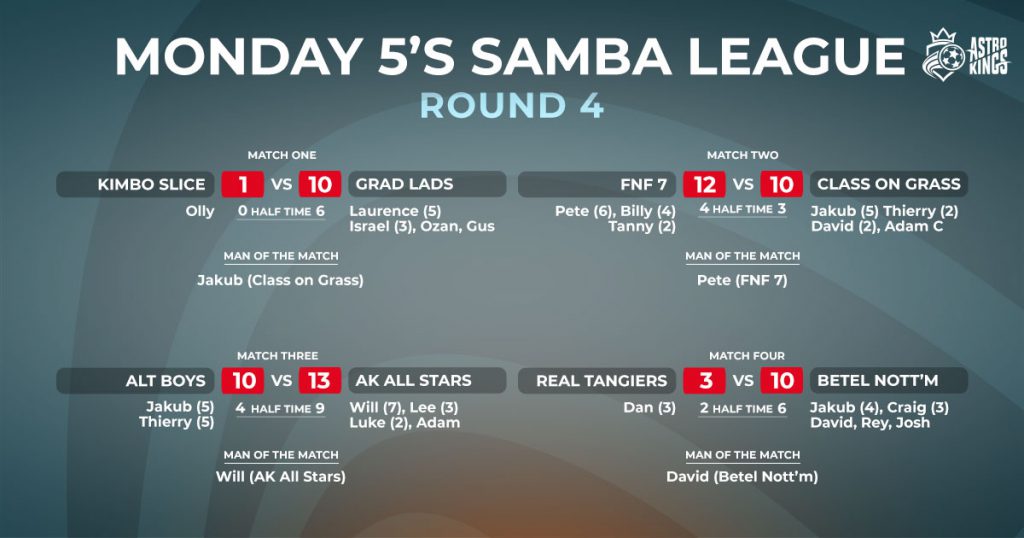 After registering a big win against Betel Nottingham last week, Kimbo Slice hoped to continue their solid form against league hopefuls Grad Lads, who following an eight-nil whipping by FNF7, were obviously keen to get their title chase back on track.

Kimbo’s keeper had pulled out of the game shortly before kick off and that appears to be the major contributing factor as they shipped six in the first half and didn’t fare much better in the second half as they were dominated by Grad Lads.

A consolation goal from Kimbo’s Ollie is all they could muster on the night. Play-maker Gus put in a man-of-the-match performance for Kimbo, and his distribution helped Laurence rack up five goals for his Golden Boot chase.

The league’s highest scoring teams faced off tonight and spectators knew this wasn’t to be a dull affair. Both teams are known for their finishing and certainly didn’t disappoint. Goals flew in at both ends and in a tight but free-flowing half, FNF had the edge and went into the break four-three up.
The second half was just as entertaining for the neutral. Great football from both teams had them locked at eight-a-piece at one stage, but with Pete and Billy’s almost telepathic FNF partnership, they were able to break into a lead. The game ended 12-10 and even Jakub’s five goals for Class wasn’t enough to match FNF’s goal haul.
FNF’s Pete will be delighted with his six goals and man of the match performance, but he’s still ten behind his teammate Billy, who’s blazed ahead in the golden boot table with a personal tally of 22 goals so far this season. This season has seen a huge improvement for Class and they could yet go on to take the title.

Still without points this season ALT Boys were looking to reverse their fortunes against inconsistent AK All Stars. Despite opening the scoring, it looked like a familiar tale as AK built a five goal lead mid-way though the first half and extended it to six in the second to lead 12-6.

And this is where the wheels fell off for AK – Either through complacency or poor game management, their defence suddenly shipped goals faster than Usain Bolt in his prime as ALT Boys rattled in four unanswered goals, closing to within two with enough time to pull off one of the shocks of the season so far. For once though, AK managed to pull a result out of the fire and hang one for three points they only just deserved.

One man who can take pride in the result is AK’s Will who proved too much for ALT Boys’ defence with seven goals and man of the match.

After winning last season’s title, Betel Nottingham have had a bumpy start to this season and were hoping to get their title campaign back on track. On the other hand Real Tangiers were determined to grab all three points after earning a point last week in a tightly-fought draw against AK All Stars. Betel went straight into attack in the first half, and went four-nil up before Dan pulled two back for Tangiers. Two more for Betel saw the teams head into the break with a six-two scoreline.

Tangiers fought well into the second half but could not stop the inevitable. With David Zakulec pulling the strings, Betel raced into the lead with deft finishing from Craig and Jakub. Dan completed his hat-trick with a late Tangiers goal but it wasn’t enough to catch Betel, who ended the game 10-3 winners.