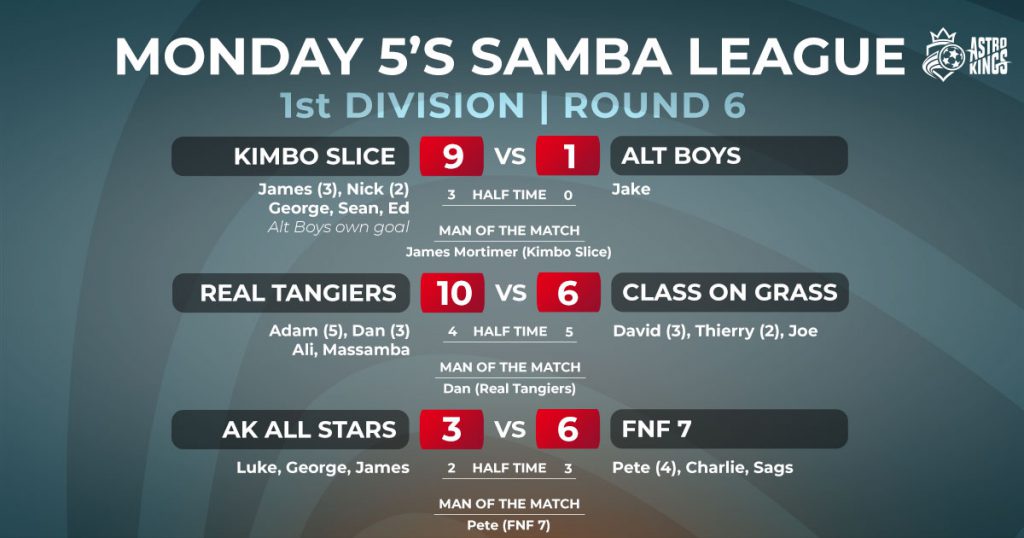 After a one week hiatus for both teams, Kimbo Slice and ALT Boys were rearing to go in tonight’s fixture. Both had lost their last league games and with the title race so wide open; three points could make a big difference to their campaigns. It took only four minutes for Kimbo to slot home their first goal of the night, as James Mortimer found the target. Two more from Kimbo saw them finish the first half three-nil up.

Two minutes into the second half James had scored his hat-trick goal and Kimbo were on a rampage. By the time the reffed blew for full time every Kimbo player was on the scoresheet and ALT Boys registered just one goal in the opposition’s’ net, courtesy of Jake.

Facing each other in game week six were two team who are no strangers to each other. Having played each other twice last season, in a seven-all draw and a five-two victory to Class; it was Real Tangiers that were hoping to be the winners this time round, considering their current form. It only took two minutes to see the opening goal of the night, as Joe finished neatly for Class. Goals were exchanged in an attacking half, which saw Class enter the break five-four up, and Tangiers’ Adam already registering a first-half hat-trick.

The second half was equally as entertaining, but perhaps not for Jakub who was shown a red card for Class. In the first minute of the half Ali equalised for Tangiers, and then with ten minutes to go, with the scores at six-a-piece Tangiers started to break away into a lead and eventually end the game ten-six winners. The loss of a key player was devastating for Class on Grass, but Tangiers took full advantage.

Summer league runners-up FNF7 were sitting atop the current league heading into tonight’s fixture against AK All Stars. A team that have been plagued by inconsistency but still have a three game unbeaten run behind them. It was a cagey first half and it took until the five minute mark when Pete had broke the deadlock with a smart finish for FNF 7. By the end of the half Pete had bagged a hat-trick and FNF 7 led three-two.

Soon into the second half James equalised for AK but that was to be the last goal of their night. FNF extended their lead with goals from Charlie and Sags, and Pete’s fourth, to secure all points in a six-three victory. FNF now sit five points clear at the top, and face an in-form Kimbo Slice next week.