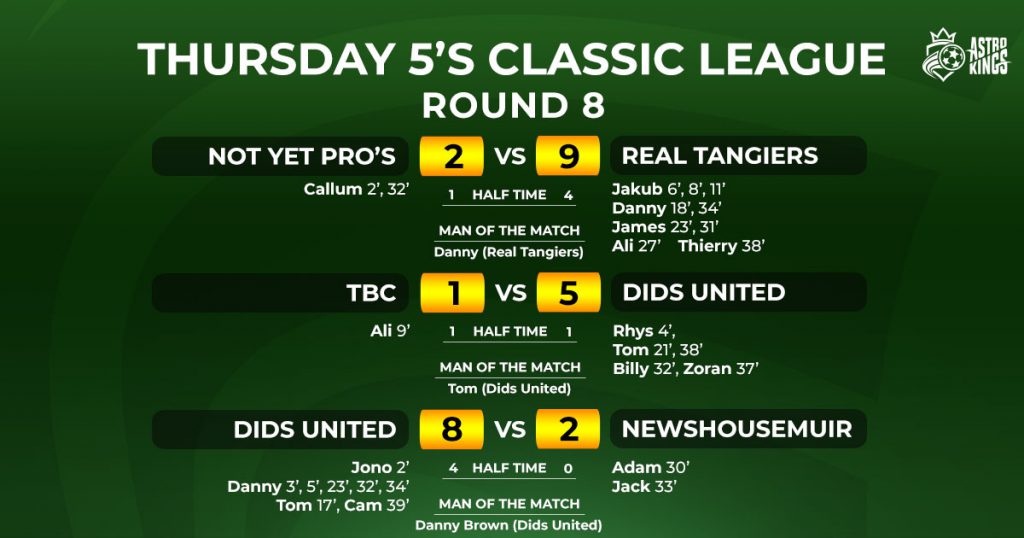 Top-of-the-league Real Tangiers faced Not Yet Pro’s in game week eight, a team they’d beaten 10-4 earlier in the season. When Callum opened the night’s scoring for NYP in the second minute it looked like Tangiers had a challenge on their hands if they wanted to repeat a similar scoreline to their previous match-up. However a Jakub hat-trick and a goal from Danny saw Tangiers head into the break four-one up.

It took three minutes into the second half for Tangiers to extend their lead, when James grabbed his first of two on the night. More goals came their way courtesy of Ali, Danny  and Thierry, and a second goal for NYP’s Callum mid-way through the half ended their goal count on the night.

Dids United kicked-off their first game of the evening against a TBC side that come off the back of their first win in four games. It took four minutes into the first half for Rhys Higgins to hit the target for Dids, however Ali equalised for TBC to see things square at the end the half at one a piece.

It only took a minute for Dids to score their second, when man of the match Tom Luddington scored the first of his brace. Unfortunately for TBC the Dids defence was too strong on the night and they failed to register a second half goal. Billy and Zoran got themselves on the score-sheet to see Dids to take the game as five-one winners. They now had had to face a fresh Newshousemuir in their double game week, would they have enough energy to win back-to-back games?

Due to league schedules tonight’s match between Newshousmuir and Dids United was a double pointer. So with a massive six points on offer both teams knew a win would be a great end to 2018. Having already played earlier in the evening, Dids had to dig deep and hope they hadn’t run out of steam. They didn’t have to worry though as Jono opened the scoring for Dids in the second minute. More goals came  their way when Danny and Tom found the net to see them four-nil up at half time.

Three minutes into the second half current golden boot leader, Danny Brown, secured his hat-trick, his third of five on the night. Adam returned fire for Newshouse but it wasn’t to inspire the come-back they needed. The game ended eight-two, and Dids take the six points, which, when added to the three points they took from the earlier fixture, its a great Christmas gift for themselves. The nine-point haul this week now puts them just three points behind league leaders Real Tangiers. It’s looks lie it could be a very exciting 2019.