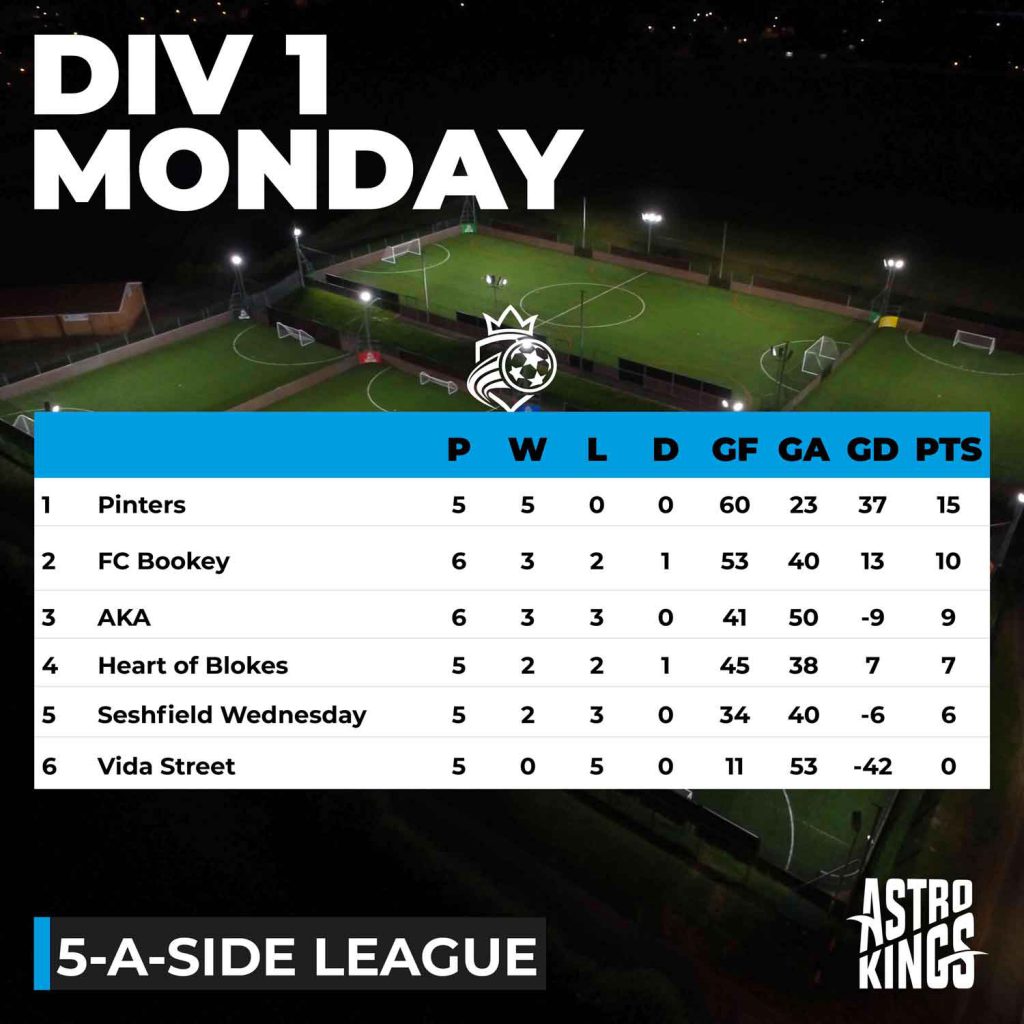 Three things in life are certain: Death, taxes and a Pinters win. Can anyone stop this five a side juggernaut from dominating Division 1? Meanwhile a tight loss for Bookey sees them fall 5 points behind the top spot on 10 points. AKA will feel lucky to sit in third on 9 points, with a goal difference of just -9. HoB and Seshfield are neck and neck, separated by just one point.

With 32 goals already this season you cannot help but wonder what Jordan (Pinters) has in his diet, averaging over 6 goals a game so far this season. Chris and Adam (HoB) have combined to score over half of their teams goals between the two of them. Due to Jordan’s scoring dominance it easy to overlook Danny’s 10 goals on the season, however we’re sure most players would be happy to average 2 goals a game! For fifth place in the golden boot race we have a three way tie between Tyrone (Bookey), Anton (AKA) and Rob (HoB). 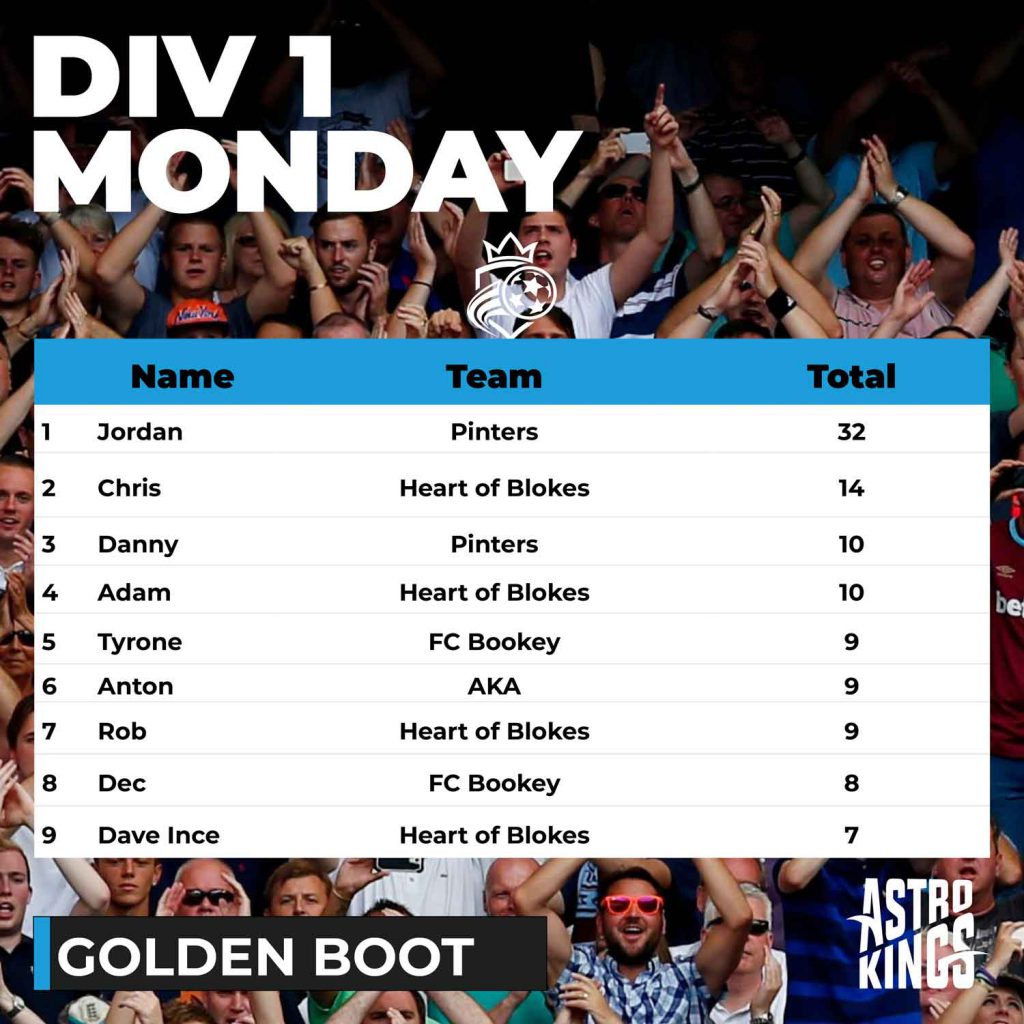 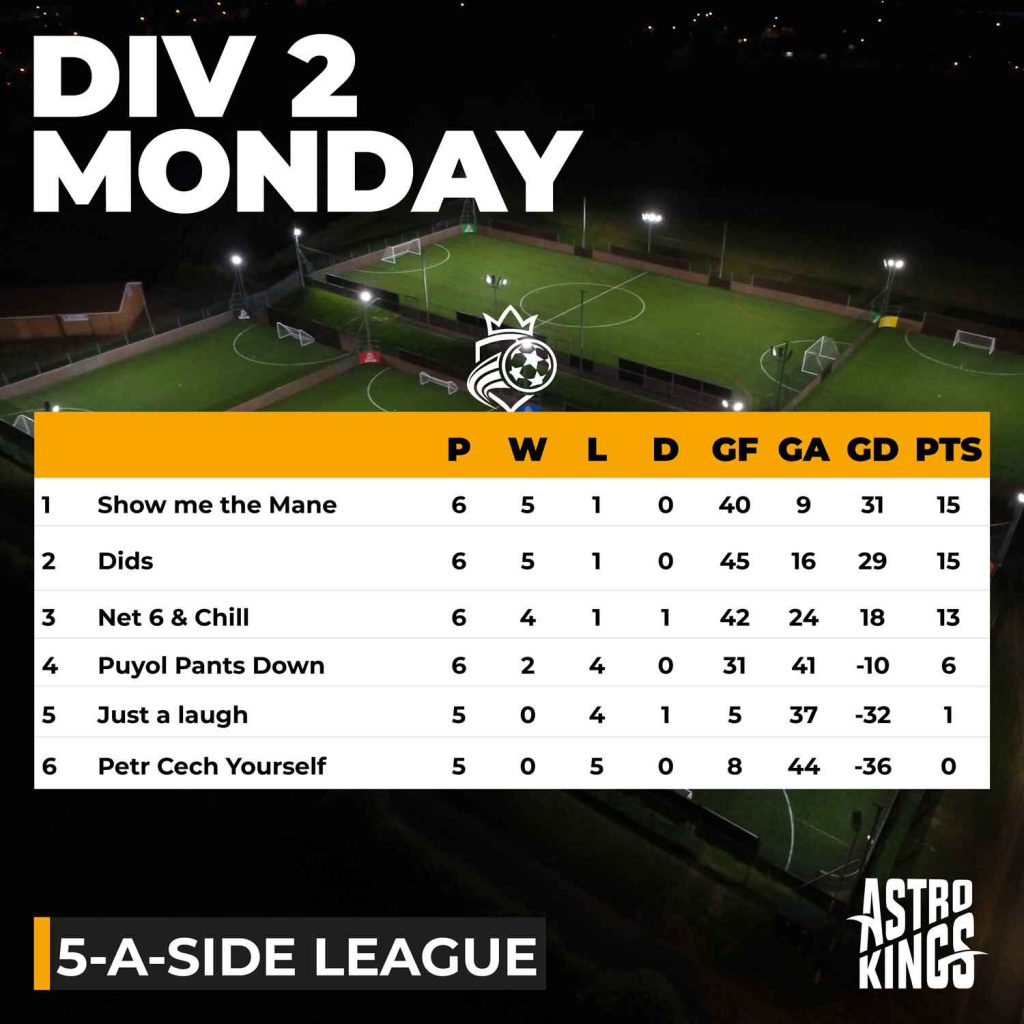 With just 2 points between third and first Division 2 is looking like a title race that will boil down until the final day of the season. Show me the Mane currently sit atop the table, thanks to a goal difference of 31 to Dids’ 29, just two goals difference! Whilst Net 6 will be waiting for the teams above to slip up to leapfrog up to first place. Puyol Pants Down will undoubtedly feel they are better than their fourth place ranking shows, something we are sure they will prove by the end of the season. Unfortunately this just has not been the season for Just a Laugh and Petr Cech Yourself, sitting on 1 and 0 points respectively. With 5 goals so far this season will be looking everywhere and anywhere for a goal scorer next season.

Just like the league table the fight for the golden boot promises to be a close one, with Willow (Net 6) and Danny (Dids) both leading the pack with 10 goals each. Sitting behind them with 9 is Jack (Dids). Rounding up the top 5 we see a strong showing from Show me the Mane with both Thomas and Lee scoring 7 each on the season. 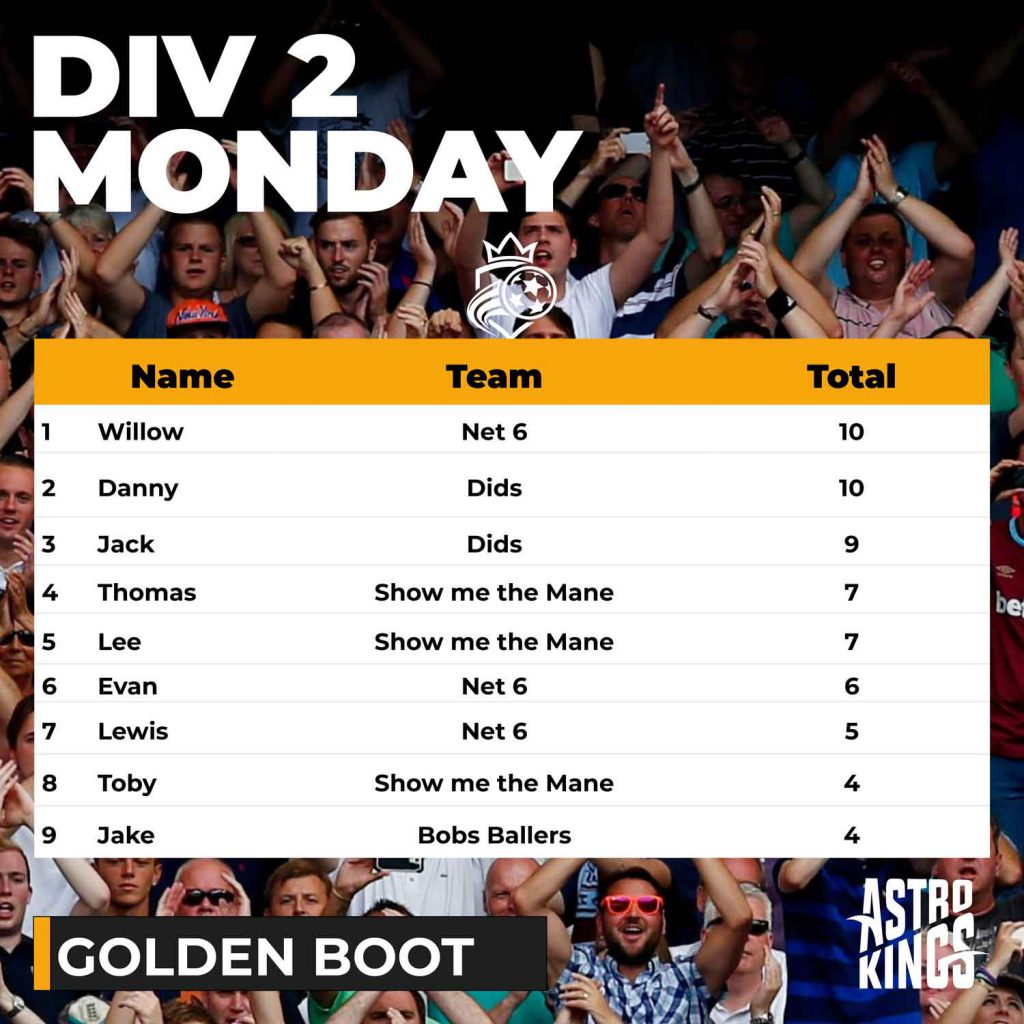 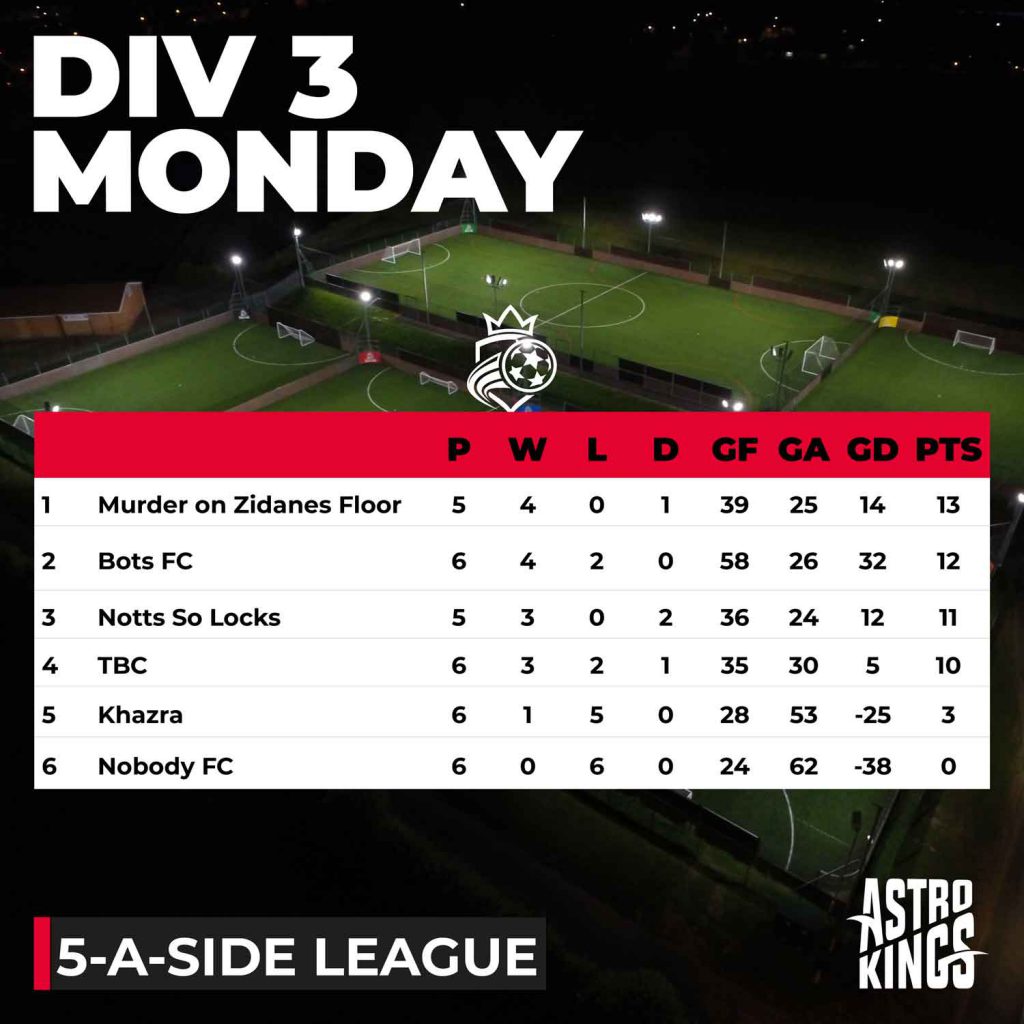 In the closest of all three divisions, just 3 points separate first place from fourth. Murder on Zidane’s Floor currently occupy first. With Bots just one point behind them on 12 points, despite holding the best goal difference in the league with an outstanding 32. Notts so Locks know the title could still be theirs, just two points from the top of the table. Despite their low goal difference of 5 TBC still have a chance to win the league from fourth place. Khazra know any hopes of the title are gone, but will be desperate to ensure they don’t finish bottom with Nobody FC just 3 points behind them.

Whilst the league table might be close, Tom (Notts so Locks) has ensure the golden boot race isn’t so tight, ruling the roost with 15 goals on the season. Trailing behind on 9 goals each are Jake (Zidane’s Floor) and Sherjeel (Khazra). Connor (Nobody FC) and Alex (Bots FC) round up the top 5. 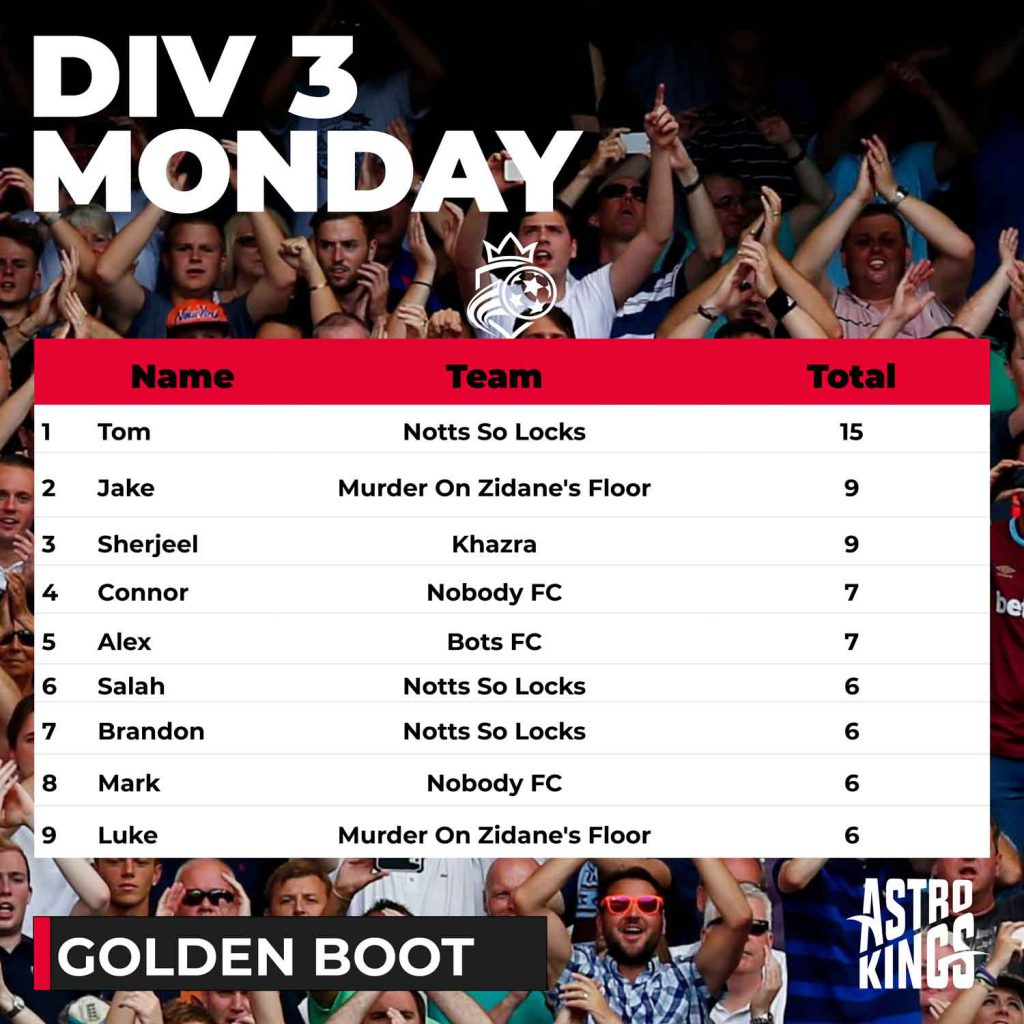 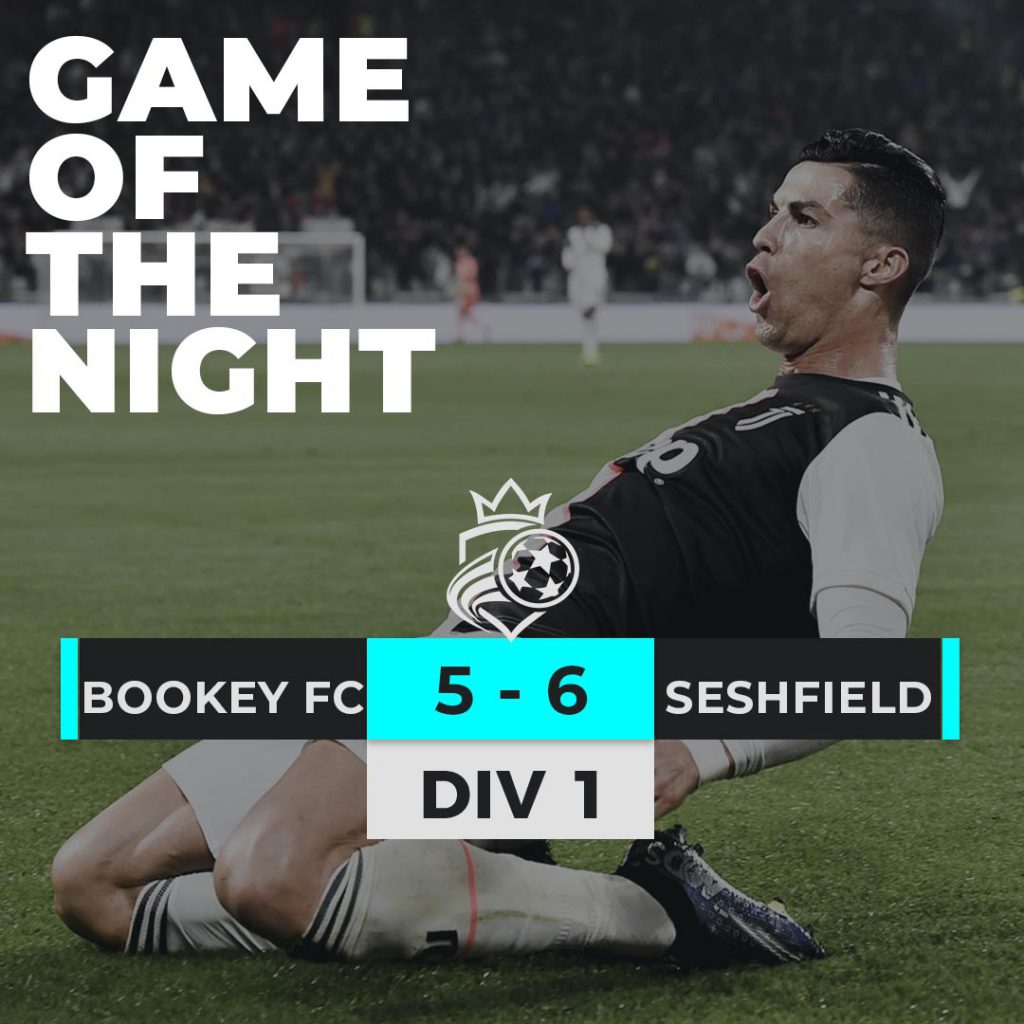 This action packed night at Astro Kings made for a difficult decision choosing our game of the night. However a decision had to be made, so a huge congratulations to Bookey FC & Seshfield Wednesday for a fantastic match. The quality of the players in this game was clear to see. Both keepers pulling off fantastic saves throughout the match, 4 unstoppable finishes and a late winner, this game had everything you could ask for!

Meanwhile our Player of the Night award goes to Adam Cross. Playing in 3 separate games, pulling off acrobatic saves throughout the night and even scored a top corner screamer to keep his team in the game. Well done Adam, Peter Schmeichel would have been proud of this weeks performance! 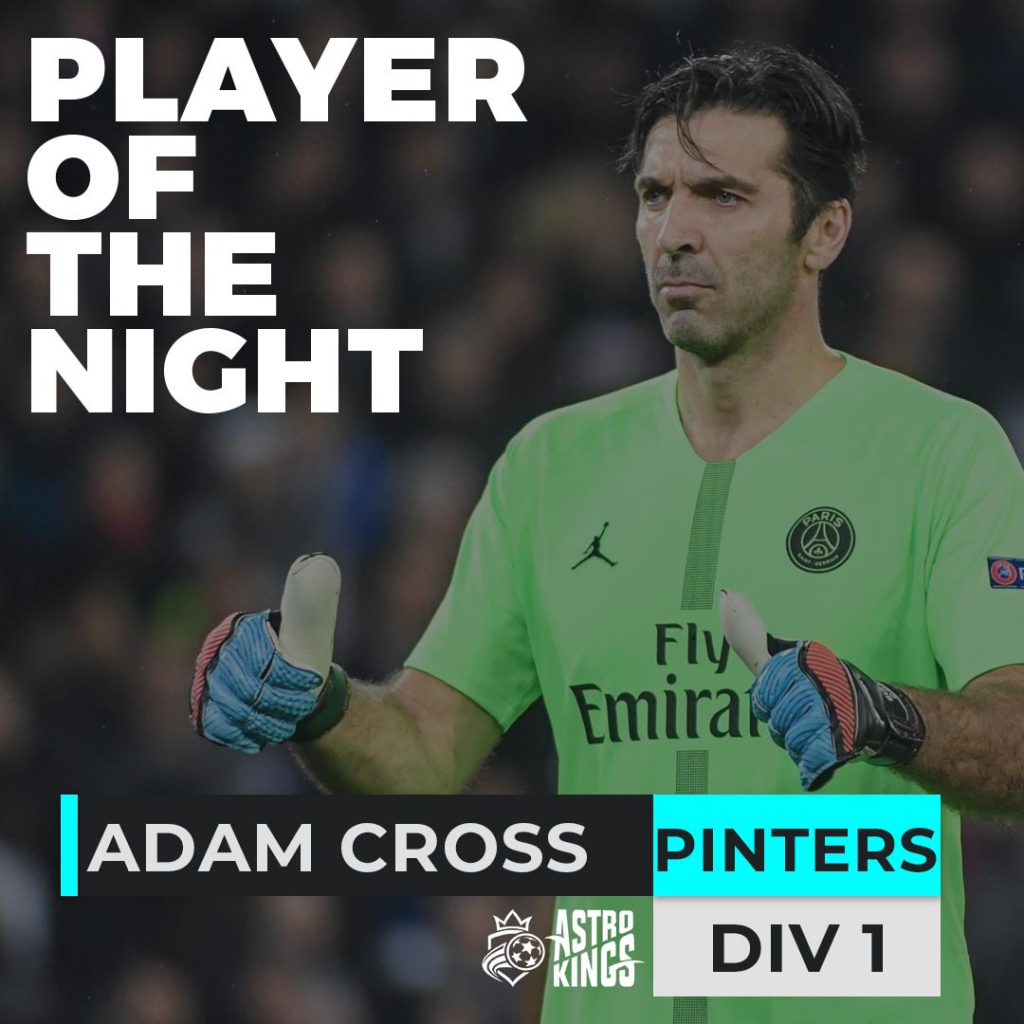