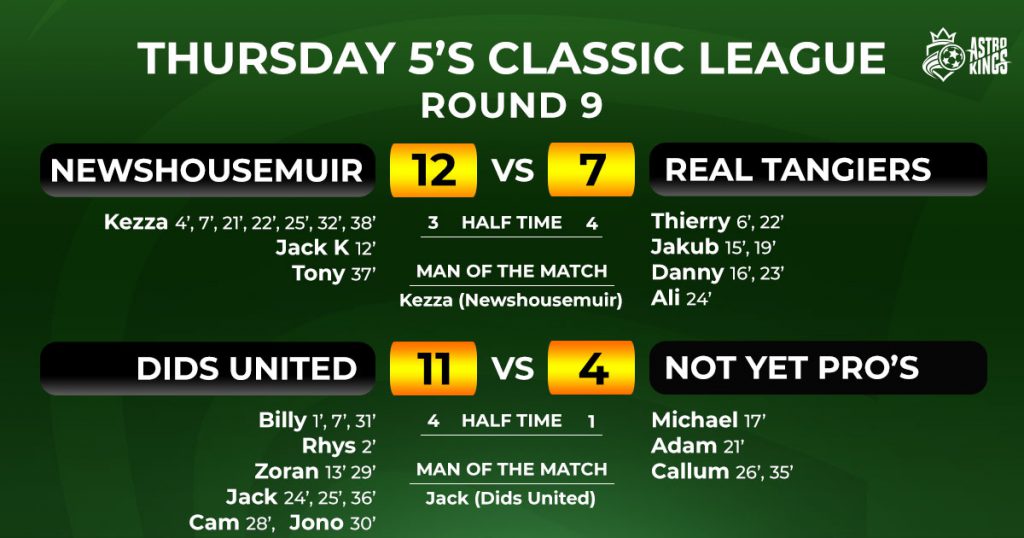 Kicking-off the first Thursday Night league fixture of 2019 was Newshousemuir who were facing the unbeaten title contenders, Real Tangiers. When these two faced-off in November it was Tangiers that took all three points is a close six-five showdown. It looked another close game was on the cards, as both teams were on target in the first half and headed into the the break with a four-three scoreline in favour of Tangiers.

In the second half Tangiers hoped to put the game to bed, and cement their place at the top of the league. However, when they managed to be in prime position with a seven-four advantage, it all went horribly wrong. Having only five players on the night, Tangiers ran out of steam, maybe the Christmas break had took it’s toll on the team. All credit to Newshouse though, the in-form Kezza put in a man of the match performance and steered his team to victory with his seven goals on the night and inspired a superb 12-7 comeback victory.

Having only lost one game this season, Dids United are very much title contenders. They faced Not Yet Pro’s tonight, who despite not registering a win since November, could finish a respectable third with a turn of fortune.  It only took 20 seconds for the tone to be set, Billy hitting the target for Dids to take an early lead. More goals came for Dids in quick succession, and when Michael pulled one back for NYP just before the break, the score was set at four-one.

Having a full squad on the night obviously benefited Dids. The rotation of players saw all out-field players get on the score-sheet eventually, and their energy proved too much for NYP. By the time the whistle blew for full time, Billy and Jack had bagged hat-tricks and collected all three points for Dids. Now level on points with Real Tangiers at the top of the table, the next two fixtures are crucial for Dids United.