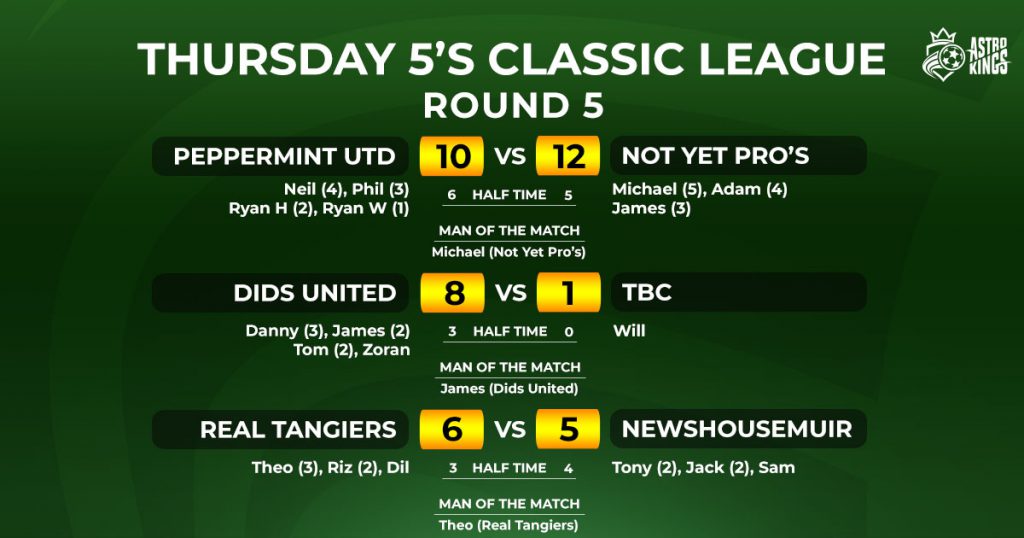 After suffering two defeats on the spin, Not Yet Pro’s headed into this game determined not to make it three in a row. Standing in their way was Peppermint United, who logged their first win of the season last week and have come into form. The first half saw both teams going all out attack, and goals were exchanged readily until the ref blew for halt time, with the score at six-fie to Peppermint.

The second half was a tight affair. Spectators were treated to a goal-fest and scores were racking-up for both teams. However in the final minutes NYP burst into the lead and managed to hang-on for a massive win. Considering they were without subs on the night, and with thanks to the man of the match, Michael’s five goals, this was a big victory for NYP. Peppermint will be disappointed they lost their lead, and will have to tighten up in next week’s fixture against top-of-the-league Real Tangiers.

Hoping to keep their unbeaten record intact tonight was Dids United. They faced TBC, who, after a superb start to the season, have since lost their last two games. TBC were without subs tonight, so conserving energy was a priority. They tried to contain Dids as much as they could, but eventually conceded the only three goals of the half.

The second half kicked-off and Dids knew they had to capitalise on TBC not having fresh legs to keep up with their pace. Dids soon increased their goal tally to seven, before Will scored TBC’s only goal of the evening. Dids now sit second in the league with games in hand. With their impressive goal difference a win next week against Newshousemuir could see them go top, if Real Tangiers slip-up.

Coming into this game on a three game winning streak, Real Tangiers looked firm favourites against a Newshousmuir team that were sitting rock bottom, until it became clear they only had four players. As you might expect, Newshouse took full advantage going three-nil up, but Real were fighting hard and thanks to powerful shots from Theo in particular, fought back to trail by just the one goal; four-three down.

Real were up to a full team for the second half, but once again Newshouse opened the scoring. With Jack and Tony on target, it looked like it could be a big upset for the league leaders. What was a deficit soon turned into a comeback victory, with a late minute winner. A stellar performance from Tangiers, especially Theo, who grabbed a hat-trick, and whose heroics, both upfront and in goal, turned a potential disaster into a great comeback.