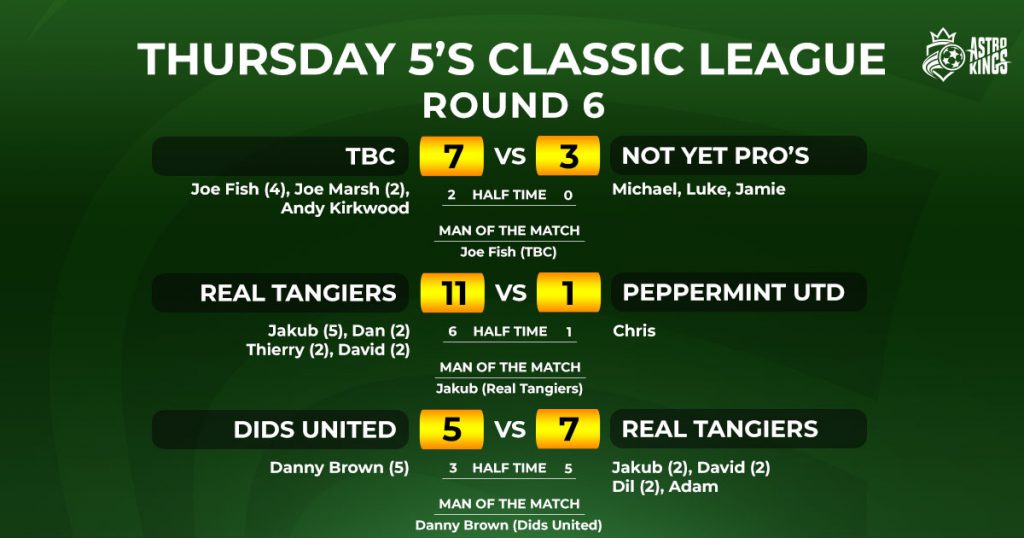 On a three game losing streak TBC were desperate to turn their season around this week. They faced a Not Yet Pro’s side that were level on points, and full off confidence after winning a 22-goal thriller against Peppermint United in their last game. The match was goalless for the first 15 minutes, then goals from both Joes – Marsh and Fish, broke the deadlock and put TBC two-nil for the first half.

TBC didn’t hesitate to extend their lead in the second half, rattling-in another four until NYP replied when Michael hit the target. NYP started to get into the game in the last few minutes but TBC had already put the game to bed, ending the match seven-three winners. Joe Fish’s four goals on the night earning him man of the match and rounding-off a great performance and much-needed win for TBC.

Kicking-off their first of two fixtures this game week, Real Tangiers hoped to continue their glorious unbeaten run against a Peppermint United team that usually have no problem scoring, yet still sit rock-bottom of the league. Within ten minutes the scores were level when United’s Chis cancelled-out Jakub’s opening goal for Real. That was to be the only goal for United though, and Real were goal-hungry and went ino the break six-one up.

In the second half more goals were racking-up on the Real score-sheet. Thierry, Dan and David each registering a brace, and with five on the night, Jakub put in a man of the match performance. Real’s unbeaten streak continues, but their night was not over.

Going into the game conceding an average of just over two goals per game while scoring more than 10, Dids could feel confident of another victory to keep up their 100% record. Adding that they scored first and Danny Brown picked up Man of the Match and five goals alone for them, the fact that they lost will probably have come as something as a shock to Zoran and the boys.
Having taken the lead, Dids trailed by two at the break despite a first half hat-trick for Danny, thanks to goals from Real’s Dil, Adam, Jakub and two for David.
The second half was much more tense as Dids pressed and Real defended their slender lead for nearly ten minutes, before a quick brace from Dids’ Danny brought them level with nine minutes to play. A contentious disallowed goal would have put Dids’ 6-5 up, but Dil struck with a good turn and powerful shot for Real before Jakub killed the game in the final minute as Dids’ left space at the back searching for the equaliser.
This result opens a large gap at the top, but with two games in hand and the reverse fixture to come, Dids’ title bid is still in their hands.